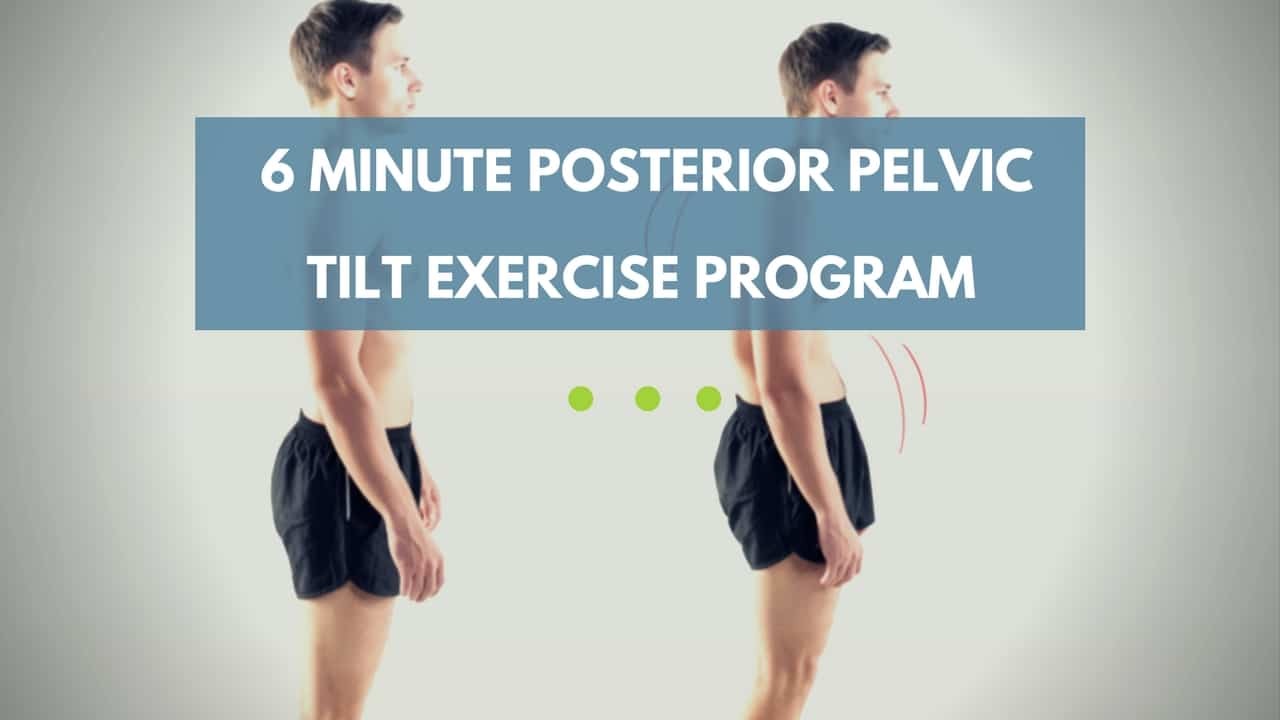 Developing a posterior pelvic tilt not only damages your posture, it also leads to unbearable back pain and muscle imbalances severely lowering your capacity for functional movement.

Sitting for extended periods can wreak havoc on your body simply because it’s not something we were designed to do for hours every day! [1]

Our ancestors didn’t outrun tigers, forage for berries or chase down their perfect mate by sitting on their asses all day – no, they got up and made things happen.

Prolonged sitting eliminates your body’s need to activate the various muscles responsible for hip and spine flexion, extension, and stabilization. Sitting has turned you into an (arguably) evolved human being with a flat ass and ridiculously dexterous thumbs for texting.

But, this thumb development is no consolation for the pelvic dysfunction that can result.

Depending on your situation, you may have developed either an anterior or a posterior pelvic tilt that has ruined your posture. 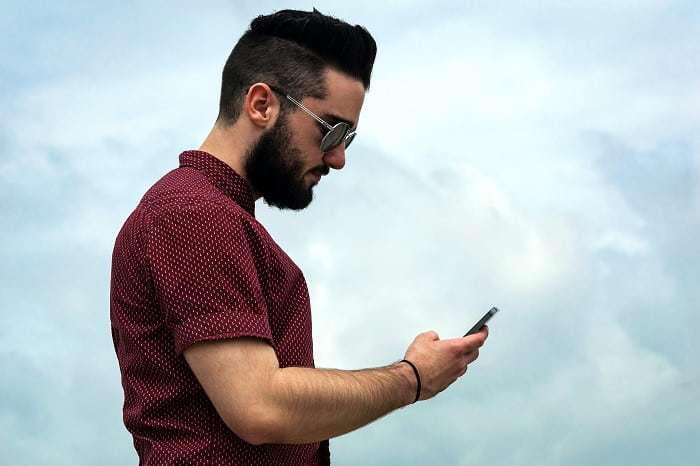 Regaining the natural position of your pelvis will not only make you look taller and more attractive, it will also help you get more mileage out of your lumbar discs and avoid being mistaken for a jumbo shrimp when you’re older.

What is a Posterior Pelvic Tilt

Pelvic tilting is a postural fault where the pelvis rotates in either an anterior or posterior direction.

With the posterior pelvic tilt, the tailbone tucks in and under the body so that the anterior side of the hips rotate upwards toward the stomach.

To help understand pelvic tilt a little better, I want you to imagine your pelvis is a bucket of water – I know it’s weird, but trust me; this analogy will make sense in the end.

Tilting your bucket in either direction will result in water spilling out, and you don’t want that. I mean, what good is a bucket if it can’t hold water?

Now, if you suffer from a posterior tilt, you’re going to be splashing and spilling water out the back side of the bucket all over your ass and down the back of your legs.

For this reason, it’s very important that your bucket of water (pelvis) be set in a good position to support your spine.

People who suffer from posterior pelvic tilt are often the people who also spend a lot of time sitting or are women who have recently given birth.

What these types of people have in common is an imbalance of strength in the muscles that stabilise the lower half of the core.

This imbalance is a result of the muscles being under, or over, developed in relation to other muscles working as a counterbalance (pulling in opposing direction).

This imbalance causes the pelvis to tilt backwards and down flattening the natural lordotic curve in your lumbar, making it appear as if you have no butt.

Imagine you’re sitting on a seesaw, and you have a friend who is about the same weight as you sitting on the other end.

If you wanted to, you could balance the seesaw parallel to the floor with both you and your friend’s feet dangling above the ground.

Now, imagine instead of your friend being on the end of the seesaw, it was the famous Austin Powers villain “Fat Bastard”.

Do you think the seesaw would be able to remain straight and balanced? – Hell no, it wouldn’t!

And this is what’s happening to your pelvis when certain muscles aren’t strong enough to do their job, throwing pelvis position out-a-whack.

Generally, posterior pelvic tilt is caused by the following:

When the anterior muscles of the core become too tight or overdeveloped, compared to the counterbalancing muscles of the back, they can pull and tilt the pelvis posteriorly and flatten out the natural lordotic curve in the lumbar spine.

Typically, it’s either the rectus abdominis or external oblique that’s involved with a posterior pelvic tilt.

The role of the spinal extensor muscles is to stabilize the natural lordotic curve of the lumbar, so that the weight of the body can be efficiently distributed and supported when standing or sitting.

When these muscles are weak, or the antagonist muscles in the anterior core overpower them, the pelvis will tilt posteriorly and flatten the lumbar.

These muscles include the:

The posas originates at the 12th thoracic vertebrae, the 1st and 4th lumbar vertebrae and the lateral aspects of the discs and attaches itself to the lesser trochanter of the femur (head of the thigh bone).

One of the two muscles that make up the Iliopsoas, the psoas plays a role in lumbar flexion, pelvic movement, and stabilization.

This muscle is extremely important for maintaining the natural curve of the lumbar, and if it becomes weak, the pelvis will tilt posteriorly as the hip extensors begin to dominate the relationship.

What About the Glutes and Hamstrings?

Usually, when someone suffers from a posterior pelvic tilt, they will aggressively stretch their hamstrings and smash their glutes with a lacrosse ball to try and loosen up the muscles.

It’s a common misconception that the glutes and hamstrings are responsible for posterior pelvic tilt. But, the truth is, they typically don’t influence it as much as the other factors mentioned above.

This is because, even though the hamstrings are tight where they attach to the hip, they can also be lengthened at the knee. Tight hamstrings should result in knee flexion, but most people suffering a posterior pelvic tilt often stand with hyperextended knees to compensate.

As you can see from the image above, a posterior pelvic tilt can occur even if the hamstrings are in extension. Thus, pointing to other factors as the more likely cause.

Apart from the obvious pain, knotting and shortening of the tight muscles mentioned above, posterior pelvic tilt sufferers will also experience a number of other related issues as a result of this pelvic position.

The problems associated with posterior pelvic tilt aren’t restricted to the pelvis, as it also causes issues up and down spine in a domino effect.

Any dysfunction in one segment of the spine – i.e. cervical, thoracic or lumbar – will affect other segments as they will compensate to bring balance back to the body.

Usually, people who suffer from posterior pelvic tilt will also experience thoracic kyphosis, which is the excessive rounding of the thoracic spine (upper back), typically accompanied by a forward poking head.

As the upper back rounds forward the compressive load will be greater in the thoracolumbar and lumbar regions of the spine. [2]

If you’re suffering from posterior pelvic tilt and are performing weighted exercises – like squats – that load the spine with a compressive force, the lumbar discs will bear the brunt of that weight.

When the spine is unevenly loaded it can cause prolapsing or herniation of discs, as the vertebrae move closer together on the anterior side creating pressure on the posterior side.

Disc herniation can place some serious restrictions on many common movements. Read this for more information on the types of movements you’ll want to avoid.

Lumbar disc damage is also one of the main causes of sciatica as the protruding disc impinges the sciatic nerve, leading to pain, tingling, numbness and weakness in the lower limbs. [3]

How to Test for Posterior Pelvic Tilt

To test whether your pelvis is in a good position, or if you have a posterior pelvic tilt, you’ll want to find and assess the line between your:

You can do this test yourself with the help of a mirror, but for best results you should ask a friend, one that wouldn’t mind touching your pelvis, to help you out.

The line form your PSIS should be descending at an angle of roughly half an inch. Females will naturally have a slightly higher angle than males, but either way it should be half and inch give or take.

However, if the line between your PSIS and ASIS is horizontal or closer to horizontal, there’s evidence to suggest you’re suffering from a posterior pelvic tilt.

Ok, now you know what the problem is, and know how to identify it, what can you do to fix it?

Below, I have provided a quick 6-minute routine to help you reset your pelvis into neutral position and treat the symptoms of posterior pelvic tilt*.

This routine works to:

Once you feel your pelvis is normalized, you can run through these exercises again, this time with a neutral pelvic tilt.

Use this first stretch to lengthen your tight and stiff abdominal muscles.

For a more advanced variation, perform this exercise with your legs straight. You might feel more comfortable performing the straight leg variation holding onto a pole or some other sturdy structure with both hands above and behind your head for support.

The arm position in both the prisoner deadlift and the prisoner squat help to minimize thoracic kyphosis, which can pull your pelvis into a posterior pelvic tilt.

Perform this exercise with a mirror to ensure there is no posterior pelvic tilt (or butt wink) at the bottom position by stopping before it happens.

For the best results*, perform this routine at least once a day to help you return to correct posture and the neutral tilt of your pelvis.

*Although the information shared on PrecisionMovement.coach is based on a well-researched, scientific approach towards health and fitness, every person is unique and individual results may vary.

To see if you’re improving, it’s always a good idea to test and retest as you progress. Use the PSIS – ASIS angle test mentioned above to periodically reassess your pelvic position.

Wrapping up today’s subject, a posterior pelvic tilt isn’t as common as the anterior pelvic tilt, but it does bring about issues that need to be addressed. Strengthening weak muscles, lengthening tight ones and inter and intramuscular coordination at end range should be your first goal in solving this problem. That and getting off that damn chair every now and then!