Fix Anterior Pelvic Tilt | Get Rid of Lower Back Pain

If you’re sitting for long hours and suffer from restricted movement or pain in your lower back, it’s possible that an anterior pelvic tilt is to blame.

This condition severely reduces athletic potential, functional movement, and of course, can lead to chronic pain in the back and lower limbs.

I know, big butts are popular these days, and you may think sticking your butt out is a sure fire way to gain attention from the opposite sex (well, to be honest, if you’re female it probably will)…

HOWEVER, forcing your pelvis into an anterior pelvic tilt is training your body to adapt to a bad position. And while waving your butt in the air will get you attention, it’s probably not the kind of attention you want.

Today, we’re going dive into the anterior pelvic tilt and you’ll come out of it understanding:

Even if you don’t have an anterior pelvic tilt, understanding this information is critical to prevent yourself from developing one and all of the associated problems in the future. [However, head over here if you’ve got a posterior pelvic tilt instead.]

What is Anterior Pelvic Tilt?

Anterior pelvic tilt is a common postural fault. This is where the pelvis rotates anteriorly on its axis causing the lumbar spine to overly arch and push the butt backwards. 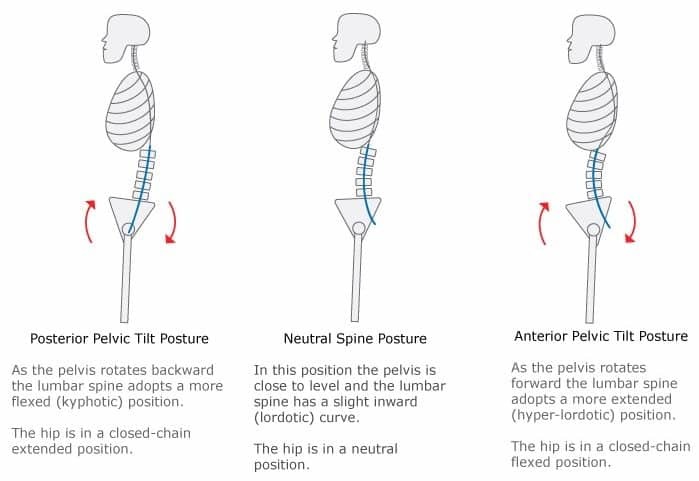 Ever seen a person walking their dog and thought “Damn, when did Donald Duck move into the neighborhood?”

That protruding backside is something called hyperlordosis (excess arching of the lumbar spine) and it’s a tell tale sign of anterior pelvic tilt.

Anterior pelvic tilt is commonly seen in office workers and other people who sit for long hours each day. This is because extended time in certain positions, like sitting, will make the muscles adapt to that position.

Sitting in a flexed hip position for long periods shortens muscles like the psoas and weakens the glutes, which affect pelvic stabilization and tilt. [1]

Another group of people who experience anterior pelvic tilt are those that carry a few extra pounds around the belly. [2], [3]

If this sounds like you, the excess weight located in your belly is pulling your lumbar spine into extension and your pelvis anteriorly.

Now, let’s take a look at what’s happening on an anatomical level.

Anterior pelvic tilt is caused by a muscular imbalance in the lower region of the body and is also known as Lower Crossed Syndrome. This condition was made famous by the brilliant, and late, Dr Vladimir Janda, which is why it’s also sometimes referred to as Janda’s Syndrome.

Lower crossed syndrome is defined by a pattern of weakness and tightness in the muscles located in the anterior (front) and posterior (back) of the lower body.

This pattern causes the pelvis to tilt anteriorly, as tight muscles exert a stronger pull against lax muscles, moving the pelvis out of its natural position.

The muscles in this relationship include: 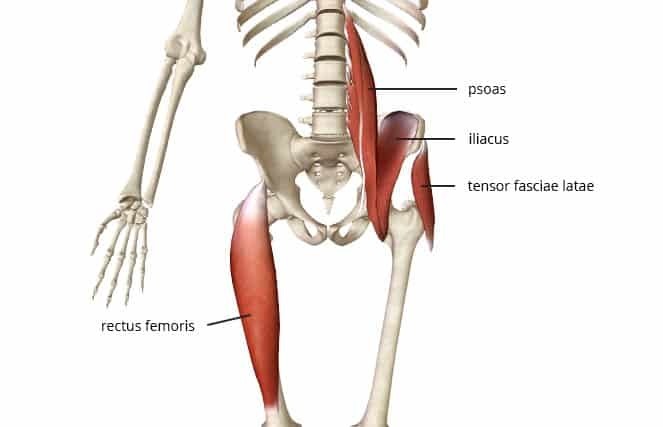 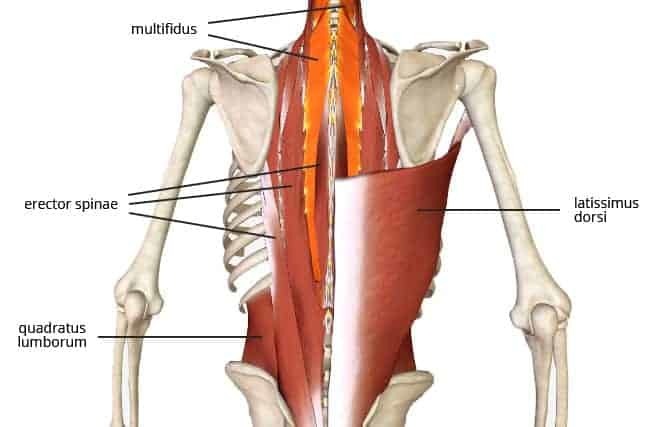 I know, that’s a lot of anatomical information to digest, so to make things easier I’ve included the image below to give you a visual representation showing how this pattern of muscular imbalance works. 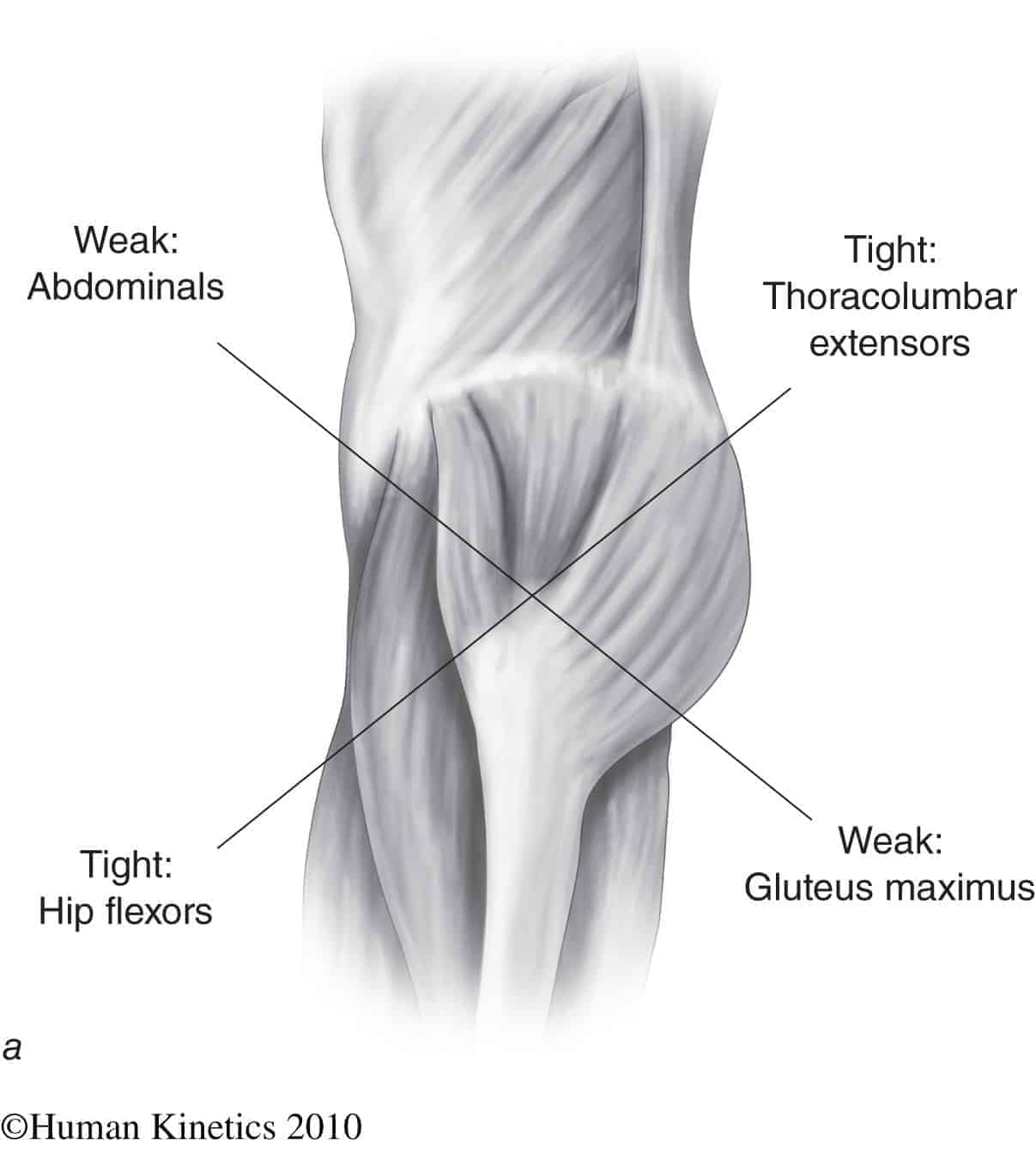 Lower crossed syndrome is kind of like that game of tug of war your high school gym teacher made you play. Except, in this situation one team is pulling the rope, while the other team is checking out the hot new foreign exchange student.

Not only will an anterior pelvic tilt affect you aesthetically, it also affects your capacity for functional movement.

Does Anterior Pelvic Tilt Cause Back Pain?

Sprinters, weightlifters and other athletes actually benefit from an anterior pelvic tilt when trying to generate power through hip extension. However, it’s a different story for people who have this pelvic tilt due to a muscular imbalance.

When people default into an anterior pelvic tilt because of a muscular imbalance, it’s because the hip flexors have shortened and/or the glutes have become inhibited. An anterior tilt will help most athletes generate power, however in cases where the glutes are weak it may result in the body finding other neuromuscular strategies for hip extension and lower limb control. [4]

For everyone else, an anterior pelvic tilt can cause pressure on the anterior aspect of your lumbar intervertebral discs, eventually causing low back pain as the natural lordotic curve (arch of the lumbar spine) is increased.

When lifting objects or performing exercises like squats, the increased compression forces combined with anterior pelvic tilt can result in damage to the discs.

Excess lumbar lordosis can also compress the sciatic nerve causing pain, tingling or numbing sensations in the lumbar region and down the back of the legs.

This is because when the pelvis is tilted anteriorly, the gap known as the greater sciatic notch, where the sciatic nerve passes through the vertebrae, becomes smaller and can get compressed against it.

Anterior pelvic tilt can also result in internal hip rotation and in a domino effect, valgus (knock) knees and over pronation of the foot.

This misalignment can result in impingement at the hip, medial knee pain, medial ankle pain or plantar fasciitis. [6]

Definitely not fun, so what can we do?

How to Test for Anterior Pelvic Tilt

First we need to determine if we actually have anterior pelvic tilt or not.

It’s a very simple test that involves measuring the angle between your:

You can measure the ASIS/PSIS angle yourself, standing sideways in front of a mirror, or, alternatively you can ask a friend to help you. There’s going to be some touching involved in this test, so make sure it’s a good friend assisting you (don’t just ask someone at the bus stop to help you out as a way of killing time – that can be creepy).

2. Locate the ASIS which is the super bony part in the front of your hips roughly inline with your PSIS

3. Draw an imaginary line from your PSIS to your ASIS

A neutral pelvic tilt will have a slight descending line from the PSIS to the ASIS with about half an inch difference between them, give or take. Women will naturally have a larger difference from their PSIS to their ASIS compared to men, however the difference should still be around the half an inch mark. 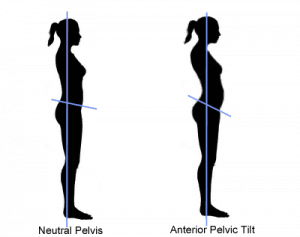 If you find that you have a difference closer to 2 inches or greater, it indicates you likely have an anterior pelvic tilt.

Sitting for long periods of time can lead to the lower cross syndrome. So, what can you do if you have to sit all day long to combat the development of a poorly aligned pelvis?

First of all, the fact that you are asking yourself this question is good. Becoming aware of the position of your pelvis while you sit is the key.

Try this, sit down, then gently move from maximum anterior to maximum posterior tilt. Try and keep your upper torso and spine still, just sliding your pelvis across your chair. This routine is a great addition for those of you who sit at a desk all day long.

Once you determine your maximum anterior and posterior tilt, neutral is usually in the middle. You should feel as though you are resting on your ischial tuberosities, with your buttocks slightly behind you.  You can also check your pelvic tilt using the trick already referenced in the article and adjust accordingly.

One of the key things for healthy sitting is to change positions frequently and make sure you are activating those muscles that tend to fall asleep. This helps prevent the imbalances from developing and taking root in the first place.

If you’ve done the test, and found that your pelvis was in a good neutral position, congratulations.

But, if you’ve discovered an anterior tilt and people are quacking at you when you walk by, it’s a good idea to do something about it and here’s that something…

Below, I have provided you with a quick 6-minute routine to help you reset your pelvis into neutral position and treat the symptoms of anterior pelvic tilt.

This routine works to:

Take the first minute to relax and stretch the lumbar extensors using the child pose.

This stretch encourages activation of the psoas and glute in extension and end range, so that they can perform in these positions rather than passively hang out.

This stretch also uses a band to create a distraction at the hip capsule and free up any restrictions to mobility in that area.

This superset trains the activation of the core muscle in both the prone and supine positions to get the most out of your stabilizer muscles.

Perform this superset while maintaining a slight posterior tilt to help engage and activate the inhibited muscles.

After you feel your pelvic position has normalized you can then attempt this superset with a neutral pelvic tilt.

Repeat this superset 4 times through.

For the final exercise, you’re going to perform reverse lunges alternating between legs for a minute straight.

Just like the last superset, you should perform this exercise with a posterior pelvic tilt until you feel your pelvic position has normalized.

So break up your sitting time with periods of moving around and throw in some of the stretches and exercises during your breaks.

And while this 6 minute routine is great, if you’ve never fully addressed all of the factors that contribute to muscular imbalance syndromes like anterior pelvic tilt, I suggest you first understand what the various factors are (there are NINE) which I outline on this page here, then take the appropriate actions to address them all for ultimate movement longevity.

This article was reviewed and updated on April 30, 2021 by our Chief Medical Officer, Dr. Erin Boynton, MD, FRCS to include new research and information on latest surgical developments. Read more about Dr. B here.