And What Exercises To Do Instead

A herniated disc – also sometimes called a slipped disc or a bulging disc – can severely impact a person’s day-to-day life.  If you’ve had one, you already know what it entails.  In addition to muscle spasms and stiffness, symptoms can appear anywhere but are focused on the low back down and can include those related to sciatica such as radiating pain/numbness/tingling or even sudden weakness (foot drop) in your muscles.

It can affect your reflexes, your ability to walk or lift things – it can make you sensitive to even the lightest of sensations [1].  It can make getting up from your desk or out of bed an outright impossibility since herniated disc pain can get worse at night, or after sitting for long periods of time [2].

In short, a herniated disc affects your entire way of life.

Typical treatment for a herniated disc is no walk in the park, either.  It can range from prescription medication to physical therapy to even surgery [3].

The recovery period can also be just as difficult.  Depending on the severity of the herniated disc and the method of treatment, recovery could be as long as six weeks [4].  During that time, you would have to avoid any movements that could potentially reinjure your back.

So, what exactly is a herniated disc?  To answer that, we need to dive into the anatomy of a disc – and our backs. 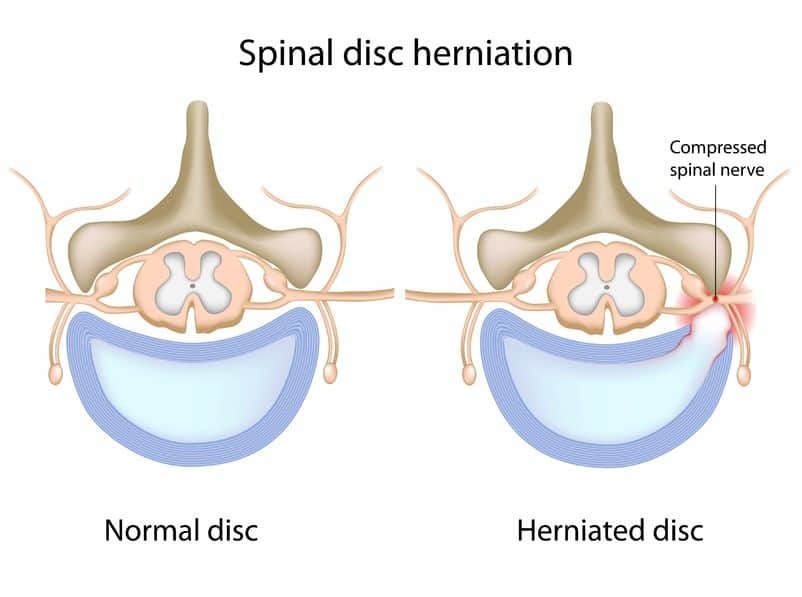 In between each of our vertebrae is a fairly malleable (and very important) ring known as a vertebral disc.  These discs are the reason we can move our backs.  They keep the vertebrae separated, act as ligaments to keep the vertebrae together, and essentially serve as shock absorbers for the spine [5]. (In short, they do a lot of important work).

These discs are essentially comprised of two main components: the fibrous rings and the pulpous nucleus.  Unfortunately, time and regular use can start to weaken the fibrous rings, causing tears and, eventually, the nucleus to protrude out.  Typically, the nucleus protrudes posteriorly (or, towards the back portion of our body), but it can also protrude laterally (meaning side to side) and also anteriorly.

It is very rare for a disc to protrude anteriorly.  If this does occur it can cause pressure on the sympathetic chain that travels beside the spinal column and abdominal pains.  It is important to consider anterior spinal disc herniation in the differential for chronic visceral pain, particularly when all of the gastrointenstinal investigations are normal.

This makes sense if you think about how we typically use our backs.  We flex our backs considerably when in a typical, slumped-over position.  This creates a lot of pressure and compression in the front/anterior aspect of the disc.

Likewise, twisting motions could create wear and tear on the lateral aspects of the ring, creating an environment for the nucleus to protrude out to the side.  Imagine a sponge being wrung out.  This is similar to the nucleus being squeezed out of the center of the disc.

This could lead to the nucleus pinching against one of our spinal nerves, which can cause a whole lot of pain and conditions such as sciatica [6].

Unfortunately, the complications of a herniated disc do not stop there.

A herniated disc can cause tightening in key muscle groups (like our lower back or hip muscles) as a type of defense mechanism (which is in place to limit movement and prevent further damage).

Even before the disc herniates you may notice some tightness around your back, particularly the quadratus lumborum and the back extensors. This is part of the problem which leads to the disc deteriorating. Imbalances of the soft tissues around the spine, and lack of proper core muscle activation leads to some muscles becoming chronically tight. The compensatory movement patterns lead to spinal disc overload and eventually disc degeneration and possibly protrusion. A condition that commonly masquerades as a disc herniation is the piriformis syndrome.

The piriformis, is a muscle which goes across our pelvis and lays perpendicularly over our sciatic nerve. The piriformis muscle can start to pinch the sciatic nerve when chronically tight, creating the leg-tingling phenomenon known as piriformis syndrome or sciatica [7].

The goal of treatment for degenerative disc disease and disc herniation is to take the mechanical load off of the disc to centralize the protruding nucleus – essentially, to push it back to the middle where it belongs.

As I mentioned earlier, the nucleus protrudes out the posterior aspect of the disc, which is why we want to avoid any types of movements that flex the lumbar spine including these four incredibly common herniated disc exercises given to people suffering from low back pain: 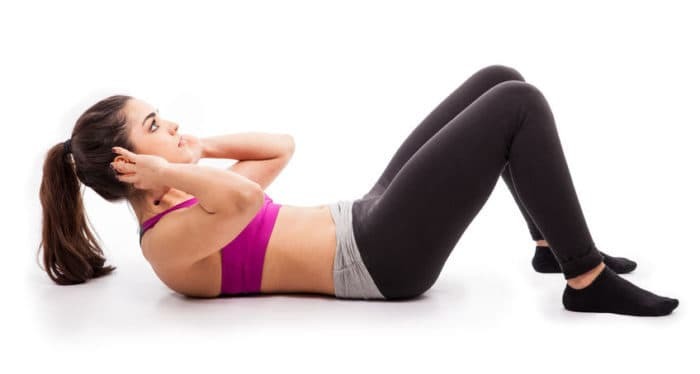 Core strength.  It feels like the first thing we would want to gain in light of a back injury, right?  Unfortunately, sit ups and crunches should be avoided at all costs when you have a herniated disc.  These incredibly popular exercises can put an incredible strain on the lower back.  Some doctors advise avoiding sit ups and crunches entirely if you have any type of lower back pain [8].

It also creates a compressional force on the anterior part of our vertebrae.  In fact, a sit-up can create the same amount of force that could create a herniated disc in the first place [9].

Bottom line?  While a strong, stable core will protect our backs, doing sits up and crunches is not the way of going about it.

In this exercise, you lie on the floor and pulls one (or both) knees into the chest.  As the knee is pulled in, the lower back flexes in the same way it would in a sit-up or crunch.  This could be made worse if the participant starts lifting his or her head, pulling it closer to the knees. We understand the desire to stretch, and sometimes you will temporarily feel better after this exercise, but often, you will stretch through the path of least resistance which does not help fix the root cause of your back problem.

Just like sit-ups and crunches, this exercise causes the back to flex.  Such a simple stretch could potentially aggravate – if not reinjure – the herniated disc, so it is in your best interest to shelve this one until everything is healed or if you can do it but make your lumbar spine doesn’t flex and remains neutral.

As good as it might feel sometimes, torso twists create a shearing force on the vertebral discs [11].  Remember that image of a sponge being rung out.  This is what we are doing to our backs when we twist, which can cause the nucleus to protrude laterally.  Likewise, most of the twisting in our back comes from the lumbar section of our spine (our lower back) – which is also the site of most herniated discs.  Depending on the circumstances, these twists are even how some people get herniated discs in the first place [12]!

Even if your herniated disc was not the result of twisting, because of the shearing force, anything that would involve twisting through the torso should be avoided.  Everything, from golf swings to even gentle yoga moves could potentially make the problem worse.

Hamstring Stretches (Where the Back is Rounded)

When dealing with a back-related injury, an exercise involving the hamstrings might seem out of place.  However, if the hamstrings are tight, the hips are less likely to hinge forward in the fold and the spine is more likely to round, creating the very flexion we are hoping to avoid.

Doctors, physical therapists, and personal trainers warn their clients about the dangers of doing such an exercise while suffering or recovering from a herniated disc [13].  It stresses the discs in the same fashion as the sit-ups, crunches, and knees-to-chest stretching.  If you are standing during your hamstring stretch, you’d also be contending with gravitational forces pulling your back downwards.

We’d all like to have more flexibility in our hamstrings, but rounding the lumbar spine is not the proper way of going about it while recovering from a herniated disc.

So, now we know some of the common exercises to avoid with a herniated disc. (Have you been told you have degenerative disc disease? Check out this article.

But what can we do until we are fully healed?

While it is always important to follow the advice of your medical professional, there are alternative exercises you can do while you are healing.  There is plenty of evidence to suggest that neutral spine core stability exercises and treadmill walking can be effective for those recovering from a herniated disc, regardless of location of the herniation [14].

Those stability training exercises are key.  Increased stability can reduce muscle tightness as well as muscle spasms.  Exercises like the good old Birddog can be utilized to train diagonal core stability.

Generally speaking, it takes 6 weeks for the pain associated with a disc herniation to resolve and the annulus to heal.

During this time, you can start with the Acute Low Back Pain Program to activate the muscles in your Core and surrounding spine in an isometric fashion. This will lay the foundation for future rebalancing of the soft tissues around your spine and a progressive program to build mobility and strength. The goal is to create a spine where the tissues are pliable, the small supporting muscles active which will allow for excellent posture and proper muscle activation.

The amount of time it takes to achieve this goal is dependent upon how long you have had the problem, an acute disc herniation is often the culmination of years of imbalances, and compensatory movement patterns, so take your time to reverse the aging of your discs by loading them with the correct exercise program.

This article was reviewed and updated on March 18, 2021 by our Chief Medical Officer, Dr. Erin Boynton, MD, FRCS to include new research and information on latest surgical developments. Read more about Dr. B here.