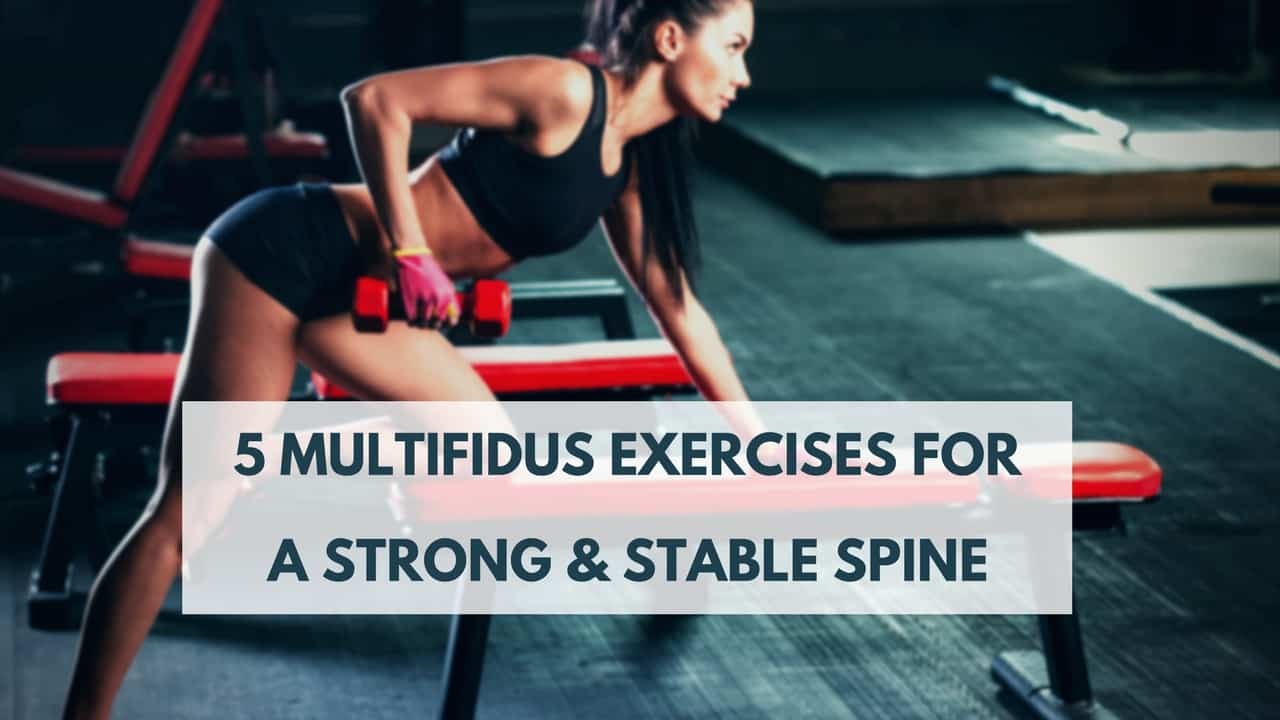 While the multifidus is a relatively small muscle, it’s critical for spine stability and these effective multifidus exercises can prevent and rehabilitate low back pain.

What is the Multifidus?

The multifidus is basically a bilateral series of muscles that are attached to the spine. Think of the vertebrae as the rungs and the multifidus as the rails on a ladder.

Although it was once considered a relatively unimportant muscle because of its small size, researchers have since discovered that its unique design makes it one of the strongest and most important muscles in maintaining a healthy back.

The multifidus looks like a long, thin pencil stuffed with millions of little fibers. These fibers are further arranged within a rod-like structure and are stiffer than any other fibers in the human body. [1]

Anatomy of the Multifidus

The multifidus is one of the four muscles that make up your body’s inner core. The other three muscles of the inner core are:

This muscle is composed of several fleshy and tendinous fasciculi (it means: a small bundle), which fills the grooves on each side of the spinous processes of each vertebra, and extends from the sacrum to the axis.

The multifidus is deeply situated in the spine and spans 2 to 4 vertebrae.  Its main action is to stabilize each joint at the segmental level. This creates stiffness and gives you a solid platform from which to generate movement and it also prevents excessive wear of the passive vertebral structures like the discs and ligaments. [2]

One big myth is the role of the Transverse Abdominis in providing local segmental stability – it doesn’t, and is more a global stabilizer via the mechanism of intra-abdominal pressure.

The Multifidus and Proprioception

Low Back Pain and the Multifidus

It used to be believed that the spine by itself was very stable and strong, but recent studies have shown that the spine, even though it’s very mobile, is also very fragile.

In fact, it can only support about 20 pounds of weight before collapsing. Thus, muscular support is critically important for spine stability. [4] This clearly shows how muscle weakness in general and specifically a weak or dysfunctional multifidus muscle can cause low back problems.

Multifidus Exercises Are a Game Changer

Learning how to train the multifidus was a game-changer for my back. When I first started doing the Birddog, I was so shaky I felt like I was having a seizure, but I quickly improved with daily training.

Then, when I started adding the more advanced exercises we’re about to go through, I noticed a significant jump in my power when throwing punches, taking shots in hockey and every other sport that requires swinging of a club, racket or bat.

The reason why is because the transverse plane of motion is critical to power in most sports and is also the plane of motion least trained in the gym and the one that must be trained to effectively target the multifidus.

So adding these exercises will not only help prevent and rehab low back pain, they’ll also improve your performance for any sport.

Many studies have shown that the multifidus muscle is atrophic in patients with back pain.  The good news is we can learn to turn the muscle back on and strengthen it to protect our back in the future.If you are in acute pain, check out the link here to learn how to isometrically activate the multifidus at each level of your lumbar spine.

Sometimes the multifidus can get a little a little fibrotic and tight when it is weak.  I love to loosen the multifidus prior to activating and strengthening the muscle using a peanut roller.

You can make your own peanut by putting two tennis balls in a sock.

While this exercise has a funny name, and doesn’t look like it has anything to do with a dog; it’s a highly effective way to activate the multifidus and will encourage lumbar spine stability.  There are a few variations, but we’re going to stick to the beginner’s version.

To perform the bird dog:

This is the classic calisthenic move taken to the next level.  I don’t expect many of you reading this to drop and start pumping out perfect 1-arm pushups, so here are a series of progressions for all strength levels:

The 1-arm row is a fantastic all around back exercise and is extremely useful for stimulating the multifidus. Here are three effective variations you can use.

First is the supported 1-arm row:

Find a weight bench and place a dumbbell on each side of it.

The next variation is the 1-arm cable row:

Last you can do the bent over 1-arm row:  This is just a 1-arm dumbbell row without using a bench for support. It not only works the multifidus but also the whole core as you tense your waist to stabilize your upper body.

This is a real core crusher; the T-lateral ball roll will attack almost every torso muscle in your body.

This is exercise trains the multifidus and can also be used to get an incredible conditioning workout. Instead of going through it all here, check out another blog post I’ve written where I break down  7 different bear crawl variations here.

Use What You’ve Learned

Your spine needs the support of all its surrounding muscles, but the multifidus are critical to prevent it from collapsing under the weight it supports.  Use these multifidus exercises to build and maintain a strong, stable, and pain-free spine that will make living your active lifestyle a breeze.

This article was reviewed and updated on February 15, 2021 by our Chief Medical Officer, Dr. Erin Boynton, MD, FRCS to include new research and information on latest surgical developments. Read more about Dr. B here.