Core strengthening has extraordinary carry over into virtually every facet of physical activity, whether it’s sports or carrying shopping bags.  Moving your body well depends on having stable core muscles.

Core stabilization exercises will teach the muscles of your hips, pelvis, abdomen and lower back to work efficiently together; resulting in improved balance and stability.

Read further to learn why we train the core differently from other muscle groups, and the three most effective training protocols and exercises you can do for a powerful, back-saving core.

Why we Train Core Stabilization Exercises

Let’s start with the function of your core musculature; to remain stiff so the force can be transferred between the shoulders and hips.  The core muscles also act to stabilize the spine and prevent lower back injuries [1].

You need to build a foundation of core strength to safely and powerfully perform dynamic movements.

An example of this is seen in sprinters; during a sprint the core stiffens, limiting torso rotation so the hips can transfer force across the body to the opposite shoulder and then back down to the hip [2].

Another sport where a strong core packs a punch is baseball.  When a pitcher throws the ball energy is being transferred from the bottom up; his legs, hips, core, shoulders and throwing arm act in concert to create the whipping motion needed for a fast pitch.  A weak core can place excessive strain on the shoulders and lower back; increasing the odds of getting injured.

Finally, contact sports like football and rugby rely heavily on core strength.  During a tackle, you must sustain the shock from legs to torso and arms.  If your core isn’t up to it; you’ll bend or twist too far – injuring your lower back.

When training the core, people commonly use high reps (think endless reps of Bicycle Crunches) or try to hold as long as they can (2 minute + planks).

However, with a little creativity we can adapt the programming intelligence we use to train dynamic movements for the core.

For example, antagonist supersets are a method that allow you to save time by pairing exercises that work opposite sides of a joint, such as bicep curls with tricep extensions (oooh the pump).

With the core, we simply pair the anterior core muscles with the posterior.

The Anatomy of the Core 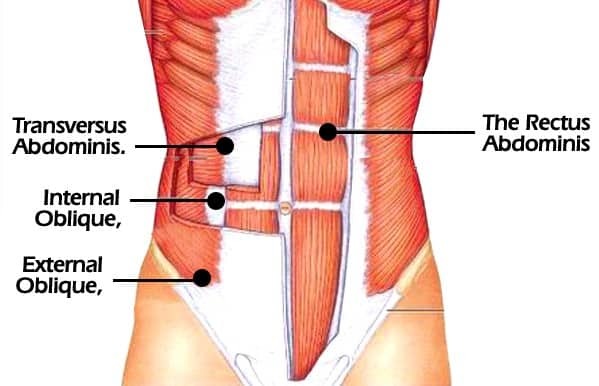 You core muscles are comprised of:

Also, even the lats, traps and glutes [3] are considered “minor” core muscles.  As you can see every muscle in the core area has as one of its functions: stabilization of the spine.

The weakest point in the core region is your lower back, specifically the lumbar and sacral vertebrae.  The last thing you want is to flex the bones of your lower back repeatedly with resistance training.

The core muscles; front, back and side are designed to maintain spinal stability because those bones aren’t meant to flex or rub against each other any more than necessary.  An appropriate core training protocol keeps your lower back safe with core stabilization exercises [4].

Luckily when I started training, I was never caught up in the idea of getting six-pack abs. I guess Mike Chang took all of the universe’s energy for that topic.

I was more interested in pecs, biceps, and triceps, so while I’ve had to deal with the resulting fallout and mobility restrictions at the shoulder, I never had to undo any self-inflicted damage from doing thousands of crunches and sit-ups to get a washboard stomach.

And when I started gaining real knowledge on how to train the body, I realized the low value from an athletic perspective that traditional ab training provides and instead focused on core stabilization exercises like you see in this article.

I’m sharing some advanced techniques here that require a focus on technique, so while anybody can “kinda” do these exercises, to do them properly requires not only great strength but also body awareness to know what muscles to fire, what to relax and what your body’s position is in space.

With that being said, definitely try the exercises on your own first just to get a feel but an even better plan is to get a buddy (or even hire a trainer) to watch this video and then coach your form (or vice versa).

Traditionally; antagonist supersets use exercise pairs like biceps curls/triceps presses or leg presses/hamstring curls.  This training method can increase training efficiency (i.e. back and chest done in the same workout instead of separate days) with no decrease in training intensity.

Here’s how we’re going to use antagonist supersets to create granite-like core stability.

Begin by placing your hands in the push-up position – then slide them ahead of you as far as you can.  Push your palms down firmly to maintain stability, and tighten your glutes while holding your body off the floor.  Hold for 5 seconds, and then switch to T lateral ball rolls.

You’ll need a stability/Swiss ball for this one, and then you’ll:

Hold for 5 seconds on each side and switch back to superman planks.  Perform 3 total antagonistic supersets of both exercises for rock-like core stability.

The conventional pyramid style of training consists of performing an exercise for a certain number of reps and working your way up in weight while decreasing reps.  Pyramids are intended to fatigue muscles while maintaining intensity levels.

This training protocol can be used to increase weight/decrease reps or reversed (the reverse pyramid, duh) decreasing weight/increasing reps.  Either way, pyramids are an awesome way to push muscles past their limits for new gains.

Get ready to barbecue your core with this reverse pyramid, core stabilization exercises routine.  You’re going to do 3 sets starting with the first exercise then onto the next in the series as you fatigue.

If you see smoke coming out of your midsection: you did it right!

I’ve saved the best for last; get ready for Tabata.

Tabata training was invented by a Japanese scientist named Dr. Izumi Tabata and researchers from the National Institute of Fitness and Sports in Tokyo.  Any exercise done Tabata style will only last for four minutes.

You’ll know that you’ve done it right if the first thing you want to do afterward is vomit, and the second thing is drop.  Here’s the protocol as set out by Dr. Tabata:

Like I said: first you puke, and then you drop.

Let’s tear your core up like a prom dress after the dance.

You can use these methods at the end of a workout, or dedicate a day to core stabilization exercises and use 2 or all three training methods to utterly nuke your core.