3 Unique Exercises for a Stiff Neck

Try these for forward head, text neck and general stiffness 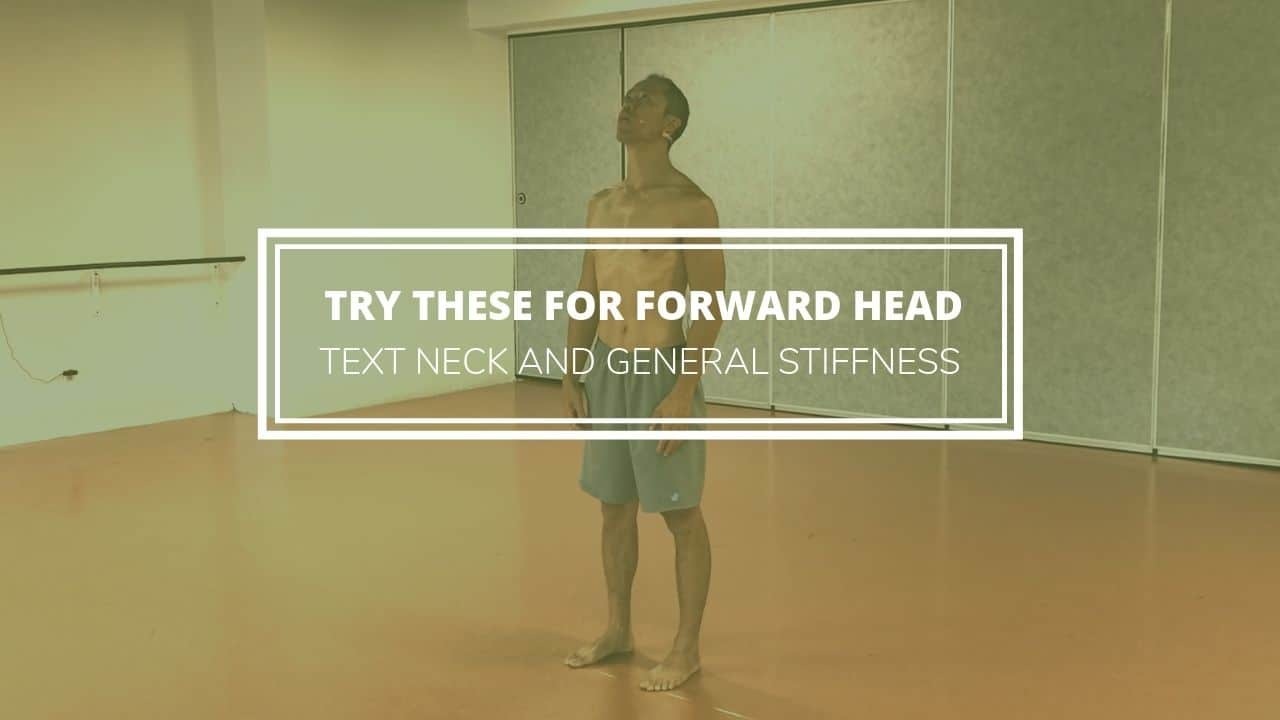 A tense, achy neck can interrupt your work, your workouts, and even your sleep. These exercises for a stiff neck will teach you how to fix the problem.

Whether it’s due to tension at the office, habitual forward head posture, or what I like to call “text neck” from being hunched over your phone all day, stiff necks are an extremely common issue.

To tackle the issue of a stiff neck, it’s critical to increase our kinesthetic awareness of how we move and hold our neck. We’ll start by learning about a core principle for neck movement and positioning called cervical lengthening and the anatomy behind it.

Your cervical spine is made up of 7 vertebrae. The uppermost or first cervical vertebrae (C1) is called the atlas. The atlas has concave facets where the occipital condyles of your skull rest – allowing you to flex your head on your neck.

Below the atlas is the second cervical vertebrae (C2), called the axis. The axis has a vertical projection called the dens that reaches up into the atlas like a turtle poking its head through its shell.

This unique connection between the atlas and axis creates a pivot joint called the atlanto-axial joint. This joint is crucial for movements of your neck – so crucial, in fact, that it accounts for 60% of all your cervical rotation. [1]

The function of this joint will come into play as we start to incorporate rotation into the exercises for a stiff neck. But before we get to rotation, let’s start with the basics and the foundation of all 3 exercises: cervical lengthening.

In cervical lengthening, you basically stack each vertebrae on top of the next that creates length and better alignment.

Your cervical spine has a natural lordotic curve to it, but too much swiping on Tinder can result in it becoming excessive leading to forward head. This improper posture leads to tight, tense posterior neck muscles as well as your pecs and scapular muscles like the traps and rhomboids.

But what’s worse is that this forward head position effectively increases the weight of your head, making it exert about 3 ½ times more force on the structures below, which is what causes the tense and sore muscles because they have to work so much harder to keep your head up. [2]

Picture what it’s like to rotate and move a head that’s heavy and compressing down on a neck that’s hunched and rounded forward – it’s a recipe for pinched nerves and compressed cervical discs.

To get out of this posture and prevent the development of pinch points and high compression, we must first create length in the cervical spine and then re-learn how to move your head on a properly positioned neck.

That’s why cervical lengthening is the foundation for all the exercises to come. Practice this technique a few times and build your ability to move vertebrae by vertebrae.

Once you feel like you’ve got this ability, it’s time to try the following 3 exercises that will help your stiff neck.

For this first technique, try to maintain a position of cervical length throughout the exercise, even as you add in other movements.

This pattern incorporates a rotational movement in a diagonal plane. As you’ll see, this is a very functional pattern that’s important to master.

This last technique will focus on movement of the skull on the upper cervical vertebrae. This creates rotation of the head along the sagittal plane – or the midline of the body.

These exercises should not only help create a lengthened and mobile cervical spine, but also a stabilized neck that is better prepared to handle dynamic movements.

By beginning each movement from a lengthened cervical spine, you can start to make this the default position for your head and neck. Trust me, this “anti-text neck” position is much better for you than that forward head trap so many of us can get stuck in.

Instead of being rounded forward and compressed, you’ll be lengthened, mobile and stable. So whether you need to pivot your neck quickly to dodge a swing in the ring or maintain proper posture while at your computer all day, your neck will be strong and aligned enough to handle it.

Please log in again. The login page will open in a new tab. After logging in you can close it and return to this page.