3 Top Exercises to Activate and Strengthen Your Serratus Anterior 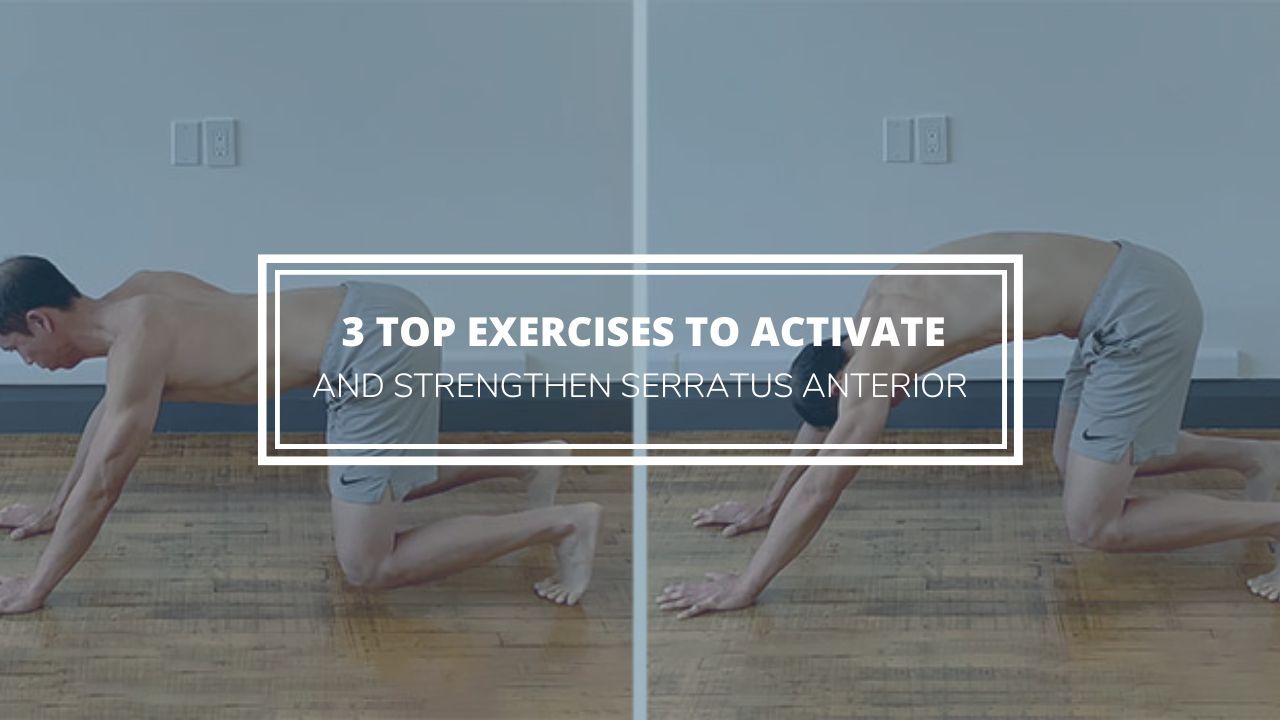 If your serratus anterior isn’t functioning properly, you could suffer from problems like shoulder impingement, rotator cuff tendinitis and tears, bursitis, and even poor posture.

We will show you how to strengthen the serratus anterior. That way, you can avoid (and even address) the wear and tear injuries listed above.

We have a great YouTube video where Coach E explains everything and demonstrates the exercises for you if you want to follow along.

We will focus on overall good function and shoulder strength by getting these muscles firing properly.

The serratus anterior runs from the medial border of the scapula (aka the shoulder blade) and inserts into the upper nine ribs. You can see it if you’re fairly lean. It sits just between the pecs and the lats.

What does the serratus anterior do?

Most people know about its main function of protraction. Protraction happens when the scapula moves forward and wraps around the ribcage.

The serratus anterior also controls upward rotation. When the arm moves up, the scapula rotates its bottom edge forward along your ribcage.

The rotation is important because if the scapula doesn’t rotate properly, then you can pinch structures in between the head of the humerus (the upper arm bone) and the scapula.

Imagine doing an overhead press. When you lift your arms overhead, and the scapula sticks in place, you pinch the bursa or the tendon in your rotator cuff. When your scapula moves properly, you don’t pinch the tissues, which prevents inflammation, pain, and damage.

The third function may be the most important of the serratus anterior. It controls posterior tilt.

Imagine there is a cup of water on your shoulder. Posterior tilt of the shoulder blade pushes the bottom tip into your back. The cup of water will spill backward onto your posterior shoulder. 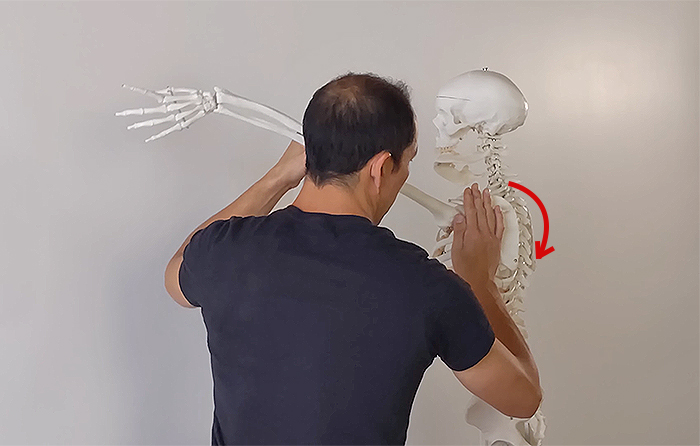 Anterior tilt would dump the water down your front.

Scroll down to the next section to dive straight into the top 3 serratus anterior exercises.

A Recent Study on the Importance of Posterior Tilt

Some recent, fascinating research documents the importance of posterior tilt. The study is called “Effects of Intended Scapular Posterior Tilt Motion on Trapezius Muscle Electromyography Activity,” which is a fairly short name as far as medical studies go. [1]

This study investigated the effects of the intended scapular posterior tilt on the EMG activity of trapezius muscles during the prone shoulder horizontal abduction exercise (PSHA).

In this exercise, you would lay prone (face down) on a table or an exercise ball. Then you lift your arms up in a T motion.

This is an important point from the paper.

Previous studies applied the intended neutral scapular position and scapular adduction and depression motion (down and back) to increase lower trapezius muscle activation during PSHA, but they also found that the lower trap muscle activity did not significantly increase.

Therefore, we presume that the intended scapular motion used in the previous studies was insufficient to facilitate greater lower trap muscle activation.

This is a key point because it clearly illustrates how you think about and do an exercise makes a difference.

That’s why we are so exact when it comes to teaching exercises – hence the name Precision Movement. 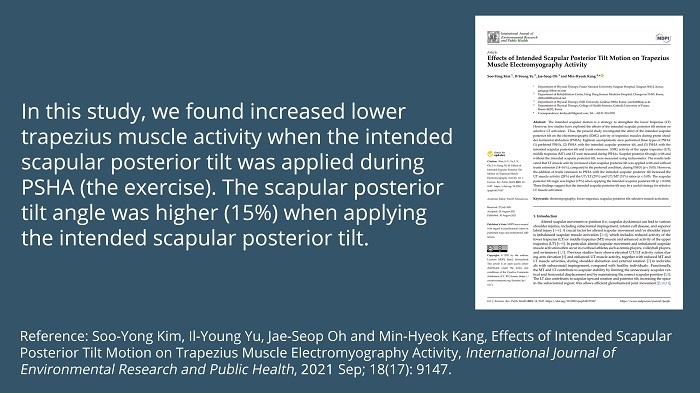 The study also discussed how increased upper trap and lower trap ratios are found in people with shoulder injuries. They note that higher upper trap muscle activity produces excessive scapular anterior tilt with elevation of the clavicles (collar bones), leading to scapular dyskinesia. That can, in turn, relate to shoulder injuries.

The authors conclude that “our findings indicate that the intended scapular posterior tilt motion enhances lower trap muscle activity while reducing the upper trap/lower trap ratio during the exercise.”

So there you have another example of how important it is to do an exercise properly and how important the lower trap muscle is to healthy shoulders.

The researchers didn’t study the activity of the serratus anterior muscle. We assume because it’s hard to get the EMG electrodes on there and get an accurate reading. But we do know for sure that when you’re doing posterior tilt of the scapula, the serratus anterior is firing, and this is a cue that we teach all the time in so many of the shoulder exercises that we have on YouTube and in the ROM Coach app.

How to Strengthen the Serratus Anterior (Top 3 Exercises)

The first exercise is one of our unique dissociation techniques designed to activate the serratus anterior.

Start off by rounding your shoulders and retracting the scapula. When you retract the scapula, think of posterior tilt sucking that bottom third of the shoulder blade into your ribcage.

Do that a few times to warm up.

Next, maintain a neutral spine, and then we’re going to posteriorly tilt the scapula as we reach our arms back into shoulder extension.

The key focus on this, and every exercise is posteriorly tilting the scapula. Hold it at the end range. Keep trying to lift the arms up.

This is going to wake up that serratus anterior muscle. Hold it for 5-10 seconds. Breath naturally and then release.

Again, posteriorly tilt the scapula as you extend the shoulders and reach those hands back. Maintain a neutral spine. Don’t go into hyperextension of the spine.

When you finish, relax.

If you have had dysfunction of the serratus anterior for a long time and you see an anterior tilt of the scapula when you look in the mirror, you may feel some pulling pain at the base of your neck, and medial border of the scapula with you attempt to this exercise. That is okay.

Actively using the muscle to re-align your shoulder will cause the tight upper fibers of the serratus anterior to eventually lengthen, go slow and steady and always, and if you are really stuck, check out the ASMR from the ROM Coach App, and the Scap Scrubbing exercise.

Over time, the painful pulling will resolve as the muscle activation increases and induces a lengthening of the tissues back to normal.

Next, we’re going to go through the shoulder rotation robot.

For this technique, you’re going to be on the wall. But when you’re there, ensure posterior tilt of the scapula and slight retraction and depression—just a little bit.

Focus on (you guessed it) posterior tilt.

You’re going to abduct your shoulders to about 30 degrees – one arm up, one arm down. Then you’ll make a fist and drive your arms into the wall, one arm up and one arm down.

Make sure you’re doing this under control. Don’t let the arm fall down.

Switch positions. Keep trying to drive the hands toward the wall activating those rotator muscles while maintaining a stable scapula with the posterior tilt.

Breathe when you’re holding. Keep trying to drive the fist to the wall.

Your shoulders shouldn’t raise or lower while performing the robot, and we’re activating the rotators and keeping the scapula stable, and working the serratus anterior. 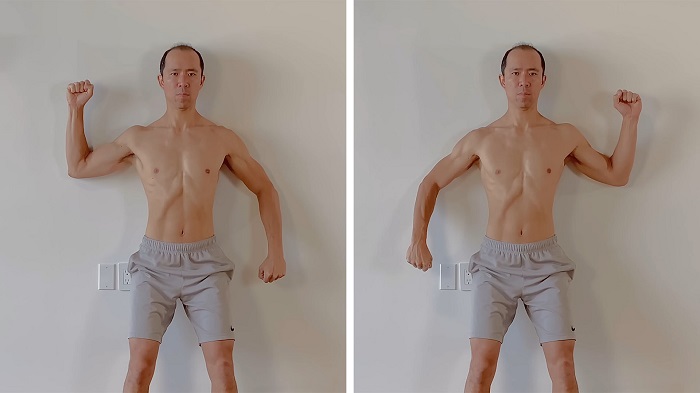 We’re getting all the functions of the serratus interior working.

Start off in the four-point position. Walk your hands about 6-8 inches in front of your body. Lift your knees up off the ground and then press up from the shoulders and your scapula so your spine is flexed. Hold it and keep activating for about 5 seconds. Breathe.

Then bring it back down. Shoulders are down and back, and retracted spine is extended.

Then press up and away from the floor. The spine flexes, and you keep activating the scapula to rotate it upward.

Keep protracting the scapula and bring it back down again, pressing up and away from the floor.

The knees shouldn’t move much. Your spine is flexed, activating the scapula muscles to upwardly rotate. Posteriorly tilt and protract the scapula.

Now you know what the serratus anterior is all about – its anatomy, functions, and three exercises to strengthen it.

This knowledge will help keep your shoulders healthy for the long term so you can do the active things you love. Combining it with a few more exercises from our complete guide to the serratus anterior will give you a little extra boost.

If these exercises feel great, we have the full videos in our free ROM Coach app (plus a few more). When you download the app go to Routines and start the Awaken the Serratus.

For further shoulder pain, lack of range, or to prevent wear and tear damage, check out our Shoulder Pain Solution.

It addresses the root causes of shoulder pain and builds up your resilience so you can keep as active as you want while staying pain-free.